Where Time and Eternity Meet 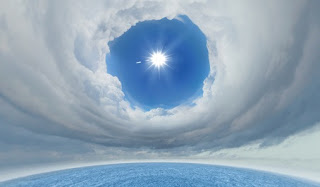 Not long ago, before time began, God knew you. You existed first with Him outside the realm of time. We think of time as linear, like a timeline, but really its more circular. It exists around the circle of the earth within God Himself. Eternity is not so much before time begins and after it ends as it is outside the realm or circle of time. Time was created by God to govern the earth so you could be sent here to be tested, proven and refined before permanently going back to the eternal or spiritual realm. God sees it all--the beginning from the end--at the same time. Our spirits are eternal, even while we are here in the earth, yet our physical sight is limited to our own period of time.


He has made everything appropriate in its time. He has also set eternity in their heart, yet so that man will not find out the work which God has done from the beginning even to the end. Ecclesiastes 3:11

From the shores of eternity--where time and eternity meet--the Lord God sent you to the earth, to be born as a baby. He knew you, He called you, and He chose you to be like Jesus--to be a son or daughter of His. Jesus existed outside the realm of time too before He was born in the earth. He was in the beginning with God. He was already there when time was created. All things were made by Him. He was sent into the earth--into time--where He proved that who He was in the eternal/spiritual realm, holds true in the physical/time realm also. He is Lord of all. You too have been sent here to prove that you will remain true to the ways of God--the Father of spirits--when faced with choice. Jesus accomplished what He was sent to do and He showed us the way, so we can follow His example.


I am the Alpha and the Omega, the first and the last, the beginning and the end. Revelation 22:13


Do not be overcome by evil, but overcome evil with good. Romans 12:21

This proving of your faith is more precious than anything else on the earth. It is more precious than the gold of the earth. Its true value is best seen in the eternal realm. God sees you praising Him instead of choosing resentment. He sees you paying your tithes even when it's hard. He sees you loving and giving even when you feel unnoticed and unloved. He sees you choose light over darkness, good over evil. It touches His heart to the core. Your love and faithfulness to Him is more valuable than anything else you do on this earth.


So that the proof of your faith, being more precious than gold which is perishable, even though tested by fire, may be found to result in praise and glory and honor at the revelation of Jesus Christ; 1 Peter 1:7

When Jesus came, He grew and accomplished His purpose here on earth. You too have a purpose in your particular era of time and place in the earth. Ultimately it is to worship God faithfully in all situations and circumstances. The rest is details, "and though you have not seen Him, you love Him, and though you do not see Him now, but believe in Him, you greatly rejoice with joy inexpressible and full of glory, obtaining as the outcome of your faith the salvation of your souls." 1 Peter 1:8-9.

If life seems tough and you are tempted to lose faith, then "fix your hope completely on the grace to be brought to you at the revelation of Jesus Christ." 1 Peter 1:13. The hope of salvation, the hope of the grace that will be brought to you when He is revealed, is an enduring hope, a solid hope that will not disappoint. Everything in this earth could fail you, but He will not! Fix your hope completely on that coming grace while your faith is refined and revealed to be purer than gold!

Ecclesiastes 12:7-at the time of death, a person's spirit returns to God.
Jeremiah 1:5-God knew us before He formed us in the womb.
Romans 8:29-Those He foreknew, He also predestined to be conformed to the image of Jesus.
Romans 8:30-Those He predestined He also called, justified and glorified.
Hebrews 4:13-No creature is hidden from His sight. He sees and knows everyone.
Ephesians 1:3-6-He chose us before the foundation of the world, that we would be holy and blameless before Him.
Psalm 139:13-16-God formed us in the womb.
Isaiah 40:22-God sits above the circle of the earth.
Psalm 139:7-10--God is everywhere.
Jeremiah 23:23-24-God fills the heaven and the earth.
Genesis 1:14-God made time, He created the lights in the heavens to separate day from night, and for signs, seasons, days and years.
Psalm 90:2- God gave birth to the earth and the world, He is everlasting (eternal) so He exists outside the realm of time.
Psalm 90:4-A thousand years in God's eyes are like yesterday. He sees all times at once.
Genesis 8:22- while the earth remains so will seasons and days.
Revelation 22:5--There will be no more night, so no more time.
John 1:1-17-Jesus is the Word of God made flesh, and He existed in the beginning (of time) with God. All things were made by Him.
Hebrews 1:1-4-He upholds all things by the Word of His power.
Colossians 1:13-20-Jesus is the firstborn of many, and holds all things together, He is the head of the church.
Hebrews 4:14-15-Jesus was tempted in all ways like we are, yet without sin.
Revelation 1:8 and Revelation 22:13--Jesus is the Alpha and the Omega--beginning and the end.
Hebrews 12:1-13-God, the Father of spirits, disciplines us for our own good, so we may share in His holiness.
James 1:1-15-When we persevere under trial, and pass the test, we receive the crown of life.
John 14:6-Jesus is the way, and the only way, to the Father.
1 Peter 2:21-Jesus is our example.
1 Peter 4:12-19-Don't be surprised at the fiery trials that try you, but rejoice, and stay free from sin, entrusting yourself to your faithful Creator.
James 1:22-Prove yourself to be a doer of the Word and not just a hearer.

Posted by RoseMurdock at 8:16 AM No comments: