The Beast of Revelation 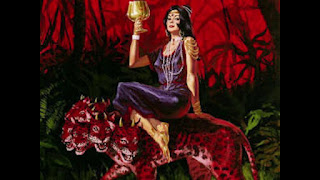 Revelation chapters 13-19 tell the story of the beast. To understand the beast, and his mark, we also need to look at the harlot Babylon and her judgement.

Babylon the Great is described in the book of Revelation as a woman who is a city which is full of merchandise. Precious stones, fabric, metals, spices, food, and livestock. There is music, crafts, mills, and human slaves. Wait. What? Yes, human slaves. Yet this city is loved by the merchants who make great wealth from her. The kings of the earth love her too, as do all who live on the earth who have become seduced by her and drunk with her wine. Babylon is called a woman, a harlot, and she has risen over time and from among all peoples of the earth. You may have heard that Babylon is the harlot church, or the church who is unfaithful to God, but I believe its more accurate to say she is all people, along with their skills and resources, who have turned from God, seduced by the fleshly pleasures they receive when giving themselves fully to them. This makes her more of a corrupt economic system because a person's time, energy, skills, and resources which were intended to be used for God's purposes, are used for self-pleasure instead. The intoxicating lure of building your own kingdom.

The woman holds a cup of wine in her hand. It is the wine of her immorality. This wine is called the blood of the saints and the blood of the witnesses of Jesus. Wine is a fruit of a man's harvest, and this wine is the fruit of the harlot's merchandise which tramples on the fruit of the gifts and callings of God's people. The end result is the intoxication of wealth. The love of money. It will suck the life out of you. You become its slave.

The people of God, and really all people, are in danger of becoming intoxicated by her wine--the love of pleasure, power, or money. God gives a warning--a call from heaven for His people to come out of her, out of Babylon, for two reasons--

An hour of judgement is coming to Babylon and God does not want His people on the receiving end of that judgement. Those who overcome are described as the ones who don't receive the mark of the beast. The beast conquers and replaces the harlot as we'll see here in a minute. But we must not fall into the harlot's trap. We must not fall under the intoxicating spell of the love of money or worldly power. We must choose God and His ways over everything else, even if its hard or costs us something.

God will pronounce judgement against this harlot for us--on our behalf. The blood of the prophets, saints, and all those slain is found in her. There are people of God who have become intoxicated on her wine--corrupted by the influence of wealth and power. God is not happy with that. We are told to come out of her and rejoice when she is judged. And judgement comes from a very unusual place--the very beast she sits on. Ten kings of the earth, who have no kingdom for themselves, unite with the beast which rises from the abyss. These kings give their authority to the beast and unite in purpose to destroy the harlot.

The beast rises from the sea--from among the people--but gets his power from Satan himself. He is the image of Satan (the dragon) who also has seven heads and ten horns. The dragon is the devil, a spiritual being, who uses the beast as a physical presence in the earth. He persecutes the Jews and makes war with the Christians (Rev. 12) but he needs the earthly authority of the ten kings to establish his global rule.

God has put it in the heart of the ten kings and the beast to unite and have a common purpose in order for God's purpose to be established, until His Word is fulfilled. They will make war with and conquer Babylon. She will fall. Many will mourn her fall. The kings of the earth, the merchants who gained wealth through her, and those intoxicated on her wine. But the saints are told to rejoice at her fall. However, the beast, and his global economic and religious rule, replaces the harlot. He conquers her and wants complete rule and authority.

The beast blasphemes God, His Name, His tabernacle, and all that is in heaven. He has global authority and controls the economic system. He makes war with the saints and overcomes them. They will refuse his economic system and not receive "the mark" which is required to buy and sell. The beast is worshiped by all who are not written in the Lamb's book of life. They will be dependent on him for survival. Their God-given occupational gifts and talents will be owned by the one who controls the economic system.

This beast/ten-king alliance is allowed by God to continue for a short time--42 months. The beast will set up his own economic system which kills the saints who don't get in on it. (The two witnesses of Revelation 11 prophesy for about 42 months while the holy city is being trampled until they are killed by the beast). Alongside the beast will rise a false prophet--a religious figure who rises from the earth. (The beast rises from the sea). This false prophet makes people worship the beast. He performs miraculous signs, calling fire down from heaven, to deceive and persuade the people to follow the beast. The false prophet tells people to make an image to the beast, and he "gives breath" to this image so it speaks, and kills those who don't worship the beast or take his mark. Those without the mark will not be able to buy or sell.

In the end, the beast and ten king alliance will try to wage war against the Lamb--against Jesus--and will be defeated. The Lord will come on His white horse with the armies of heaven following Him--those clothed in white. The beast and the false prophet will be seized and thrown into the lake of fire. The rest will be killed with the sword from the mouth of the Lord. Then it's supper time, followed by the thousand year reign. After the thousand year reign Satan himself will be released from his prison to deceive the nations and gather them for war against the beloved city of God. They are devoured with fire from heaven and the devil is thrown into the lake of fire where the beast and the false prophet are. They will be there forever and ever.

So what does this look like practically for us as believers in Jesus?

The harlot system of the world is loved by those who gain wealth and power from it. The merchandise of this earth is not evil itself, but the love of it is. When we care more about money, increase, or position than we do about God, His ways, and His people, then we are becoming intoxicated and corrupted by the harlot. This heart-attitude prepares people to receive the evil that will follow--the mark of the beast. We must separate ourselves from this harlot, even while we live in the midst of it.

Since the scattering of the believers after Jesus' resurrection, the church has gone out into the world to live in it and preach the Gospel to it. We have "grown up" among the thorns sharing in the same economic system of unbelievers. Yet God warns us not to participate in her sins. He wants us separated from her, protected from the judgement coming on her.

God loves His people and is angered by the deception that comes against His people to pull them into this trap. Judgement is coming to the harlot yet He will use another evil to bring it down. The harlot deceives believers into following her by a seductive lure of wealth. The beast will try and use a religious approach to lure people in, but will also use force to kill those who don't follow him. When we see the fall of the harlot, we know its getting close to the time of the Lord's return to establish His rule on the earth. It may be tempting to mourn her fall, but rejoice! We must be separated from her in our heart in order to be able to rejoice at her fall. She was corrupted with immorality and the Lord's city will be much better. Yet we must also prepare for the rise of the beast which takes her place and remains for a short time before the Lord returns.

Posted by RoseMurdock at 9:27 AM No comments: