America in The Valley of Decision 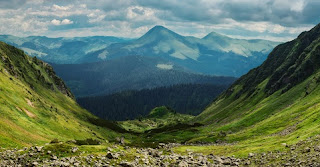 On October 18, 2018 as I woke up, I saw in the spirit a great number of people coming over a mountain and into a valley. The people were the people of America and they were coming into a valley of decision.

There were four mountain peaks surrounding the valley. Straight ahead was the mountain of God. The ones on either side were "opposing" mountains that opposed the ways of God. As the people entered the valley they were questioning which way they should go. This was the valley of decision, so each person had to make a decision which mountain they would climb. It seemed chaotic with people moving around all over trying to decide which way to go. Some went up a mountain to the left and others began to follow them. In fact, many people just followed the crowd that was around them. The people at the top of the left mountain looked down over the people in the valley and thought they all belonged to them. They were yelling, "Ours for the taking! Ours for the taking!"

There was a danger though. Since the people of God came down into the valley of decision, they could leave the valley and go up the wrong mountain themselves. Everyone in the valley, people of God or not, needed to look up over the heads of the people at the mountain of God in order to go in the right direction. If they just followed other people, they might not end up on the mountain of God. So there was a danger of those who were once God's people to get disoriented, make wrong decisions, and end up lost on the wrong mountain---opposing God instead of being with Him.

Some of the people of God knowingly went up after those on the opposing mountain in hopes of bringing them back down. But once they went up onto that mountain they began opposing God themselves. They didn't realize it. They didn't think that they were opposing God because they were only there to go after the people! But being on the opposing mountain brought them into opposition to God, no matter what their original reason was for being there. This was pride and a deception that they thought they could remain free from opposition to God themselves while in this place.  The only ones to be reached were the ones still in the valley of decision, and the people of God had to stay in the valley and keep their eyes on the mountain of God in order to remain safe themselves.

In the end, I saw many people go up to the mountain of God. As the valley cleared out, it became evident that not everyone in the valley belonged to the opposing mountain. It had appeared that way for a time, that those in the valley belonged to the opposing mountain, but as the people made their decision and moved up the mountain of God, it was not so. However, the thought remained that some of God's people could be (or may have been) lost because of disorientation (not keeping their eyes on the God's mountain) or arrogance (going after others thinking they could bring them down into the valley).


Posted by RoseMurdock at 12:10 PM No comments: