The Land of Your Anointing 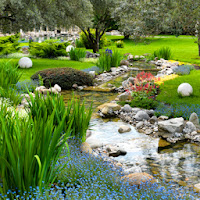 "The land of your anointing is your piece and portion of the Spirit of God. It’s the breath He has breathed into you. It began when the Spirit of God pulled together dirt from the earth, breathed into it and brought it to life. He took this creation and put him in a garden where he would grow hungry for the fruit of the land he came from. It was a place where he was to choose to be filled only with that which God had provided and leave a portion set aside as holy to the Lord. He cultivated the land, revealing and enhancing the beauty of God’s creation. Joy, gratitude and worship occurred as a result. As you agree with God’s purpose for you, the same thing happens.

A quote from my new book, "Living in the Land of Your Anointing" being released soon...so excited! God wants you to discover the beauty of His creation--and your purpose for being created!
Posted by RoseMurdock at 9:05 PM No comments:

Jesus said this to Peter after he told Him he didn't want Him to wash his feet. Jesus said if He didn't wash his feet then Peter would have no place in Him. So Peter told Him to go ahead and to wash his hands and head too! Jesus then made this statement--he who has bathed needs only to wash his feet. Once a person has bathed, he doesn't need his whole body to be bathed again, but he may need his feet washed from time to time. Our feet get dirty from our travels through life on this earth. The dusty places that our journey take us to sometimes need to be washed off. Peter thought he wasn't worthy to have Jesus wash his feet, but Jesus is the only one worthy to wash our feet. No one else can do it. No one else overcame in every way like He did. Thank God that Jesus is both able and willing to wash us completely clean! A little later that same night, Jesus told them that they were clean because of the words He had spoken to them. The next time your feet are a little dirty, go to the Word--living and written--and receive the foot washing that only He can give!


When we go before the Lord in prayer and seeking, are we looking for today's voice and today's face, or are we looking to re-live an experience of the past? God is so good and during His visits we experience sweet and refreshing times in His presence--times that we don't want to end. It may be tempting when we come before Him again, to want to re-live those moments rather than looking for what He is saying to us today. Of course we are to talk about His goodness and we need to remember the sweet times we have in His presence, but He doesn't run out! We can come before Him always and hear what He has to say for today--we need the fresh word for today, the fresh scent of today, the fresh atmosphere the wind of the Spirit is blowing in! Listen and look for today's voice and today's face. Breathe in today's atmosphere!


Posted by RoseMurdock at 2:24 PM No comments:

The Book of Remembrance

"Then those who feared the Lord spoke to one another,
and the Lord gave attention and heard it,
and a book of remembrance was written before Him
for those who fear the Lord and who esteem His name."
Malachi 3:16

What kinds of things do those people who fear the Lord talk about? Whatever it is, He is listening, paying attention and writing in a book of remembrance. He goes on to say that these people will be His and He will spare them in the end. Instead of being destroyed with the arrogant and the wicked, the sun of righteousness will rise on those who fear His name with healing in its wings!

All of you who fear the Lord, talk to each other! Speak of His goodness and His mighty acts. Talk about the glory of His kingdom, His power and His wonder. Speak, shout and sing praises to Him! He is listening. He is paying attention. Let all of your words be a sweet fragrance to Him!