Proclaim His Word with Authority 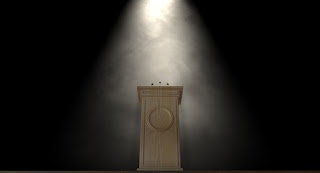 As the ekklesia, the governing body of the Lord in the earth, we are called to steward His Word here. He has already spoken His Word, and it's up to us--His body in the earth--to continue to speak it so it reverberates throughout the earth. God's Word doesn't die. It's still alive and powerful, and He is watching over His Word to perform it (Jeremiah 1:12). When His people speak His Word with the authority He has granted to us, He sees it, and His power backs His spoken Word, to bring it to pass. When you proclaim His Word, He's watching over it, and He will do it.

The Bible also tells us,"This is the confidence which we have before Him that if we ask anything according to His will He hears us, and if we know that He hears us...we know that we have the requests which we have asked from Him (1 John 5:14-15). We have to know that He hears us, and we will know that He hears us if we know that what we're asking for is His will. So when we ask for something, when we pray, when we make proclamations here in the earth, we need to know that what we're saying aligns with the Word of God, which is the will of God. His Word is His will.  And when we speak the Word of God, He's listening. We have His attention. The eyes of the Lord go back and forth across the earth and when someone speaks His Word from a confident heart, knowing that it's His will, He hears and He answers. He needs His Word to be spoken from someone with a believing heart in the earth, in order to back it with His power from heaven.

So when we pray for America, concerning the condition of our government, our schools, etc. we want to pray according to the Word of God, we want to be releasing the Word of God into the earth--proclaiming it with authority--and declaring what His Word says into the atmosphere. This is what it means to be the ekklesia, the church, the governing body. We release His Word into the earth, and as we do, He is watching over it to bring it to pass.

Any issues of concern in your life, in your family, you community, or country, pray, proclaim, speak, and believe according to the Word of God. Jesus said all authority in heaven and earth has been given to Him, and then He said for us to go in His name. He's given us authority in the earth. (Matthew 28:18). If we take that authority, and believe, having faith in His Word, knowing that it is His will, then we will be able to pray and proclaim accordingly. But if we begin to doubt that this isn't His will, then we're not going to be able to receive anything from the Lord (James 1:6-7).

He needs us to speak and release according to His Word, but he needs us to do so in faith, confidently knowing that this is His will. In order to do this we have to know His Word, so read the Bible. Start by praying and proclaiming the Psalms over the earth, your country, your state, and your community. Know what His Word says, so you can release it confidently, with authority, in the earth.

Posted by RoseMurdock at 6:56 AM No comments: