The Pillars that Stopped the Wordicanes (Hurricanes) 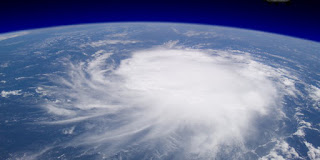 The other morning, as I woke up, I had a dream-like vision. I saw something happening to the words people spoke. There were people speaking words, which were words of death. These were not life-giving words, but words which would bring destruction. At first, these appeared to be fairly "harmless" words that people casually spoke. As these words were spoken, God would send them out over the seas--oceans--to prevent destruction from coming on people. The power of these words had to go somewhere, so by His mercy He sent them out to the waters. There they would swirl around over the waters until they died out and stopped. At first they were small swirls that didn't hurt anything too bad.

But then, I saw many words--a multitude of words. Words of death and destruction. Particularly from the hearts of people in turmoil. With violent turmoil in their hearts they would speak these words of death. Others would join them and repeated their words. This was a serious problem as others joined them--those who didn't have the same extent of turmoil in their heart--but they agreed with them and spoke their words. These words were also sent out to the seas and swirled around, but there were too many. They gathered and created a storm. Their mission was to accomplish the death and destruction they were sent to do--particularly in America. They rose up as storms--hurricanes--over the waters.

As the "wordicanes" (hurricanes made from words) raged, I saw pillars begin to form. Cloud pillars began rising straight up through the hurricane clouds. They were the prayers of the saints. As these cloud pillars rose up they slowed down the hurricanes over the waters. The more pillars that popped up, the more the winds slowed down. Even though the pillars were made out of clouds, they were thick and strong pillars that interrupted the flow of the hurricane. The pillars were prayer and repentance. Repentance for the words of death, and more. There were several strong ones at first, and then some smaller ones began to pop up too. All of them helped stop the force of the hurricanes.

After a bit, I saw the hurricanes flatten out, getting thinner and thinner. Then I saw rainbows coming down from them. The rainbows, as it says in the Bible, were a reminder of God's promise that He would never again destroy the earth by flood. Reminded by God's rainbow promise there was repentance for sin, particularly sexual sin--the LGBT movement that uses the rainbow as a symbol of wickedness, throwing it in God's face, testing His mercy. This may have also included any mishandling of God's mercy--taking advantage of it by accepting what He does not accept. Repentance for accepting the homosexual movement, as well as repentance for spoken words of death, were the pillars that stopped the storm.

Posted by RoseMurdock at 3:27 AM No comments: