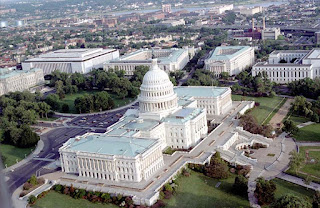 It's no longer just the House that is White in our nation's capital, it's the White City! Washington D.C. is not to be a city of darkness any longer. Instead it's a white city, a holy city, that stands for truth, righteousness, and justice.

Lord, we repent for the dark words of death we have spoken over our capital city. Many dark words have been spoken against it, even from Your people. But no longer! Now we say, The Light is shining bright in the White City. Turn up the Light even more Lord!

We hold up the arms of our President and those who stand for truth, righteousness, and justice. Light prevails in the White City, the holy city. As Joshua asked for the sun to stand still at Gibeon and the moon in the valley of Aijalon so they could win the battle against their enemies*, we ask for the Light to shine and remain in our capital city--the White City--so the foundations of our nation are once again established in truth, righteousness, and justice. Better than new. A stronger foundation.

Turn up the intensity of the Light so the darkness, the dark state, the dark words, the dark plans, will fully flee.


"Righteousness and justice are the foundation of Your throne..."
Psalm 89:14

Posted by RoseMurdock at 2:56 AM No comments: