Bonheifer's: The Cost of Discipleship

Chapter 2: The Call to Discipleship 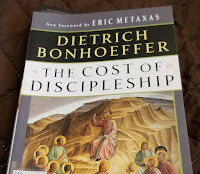 Faith isn’t something that “happens” to us. It’s an intentional thing. We make the decision to read and study the Bible, to seek the gifts of the Spirit, to love—that is faith. We do it whether we “feel led to” or not. We do it because we believe in Him, and that’s what we do as His disciples. We don’t wait for someone to tell us to take a breath, or drink water, or eat food. We do those things because we are human. In the same way, we study His Word and pray because we are His disciples.

As long as we doubt God’s leading and call to us then we have an excuse not to obey (or so we think). When He says something like, “Follow Me…” and we question, “Is that Him?” or “Is He really the Son of God?” Then we hesitate to follow Him. We begin to reason, to doubt, and make excuses not to obey. After all, we can’t follow Him if we don’t know its really Him right? Right?

Is that how we respond to Jesus’ call to follow Him and the Spirit’s urging, leading, guiding?

Is this what God said?

Is this God who said it?

The first one questions if we heard and understood what He said correctly. Do I have the correct understanding of what He meant? How do I put it into practice and apply it to my life?

The devil said to Eve, “Hath God said…” (Genesis 3:1). He didn’t deny it was God who said it, but raised doubt as to what He said and what He meant, or even if He was somehow holding them back from something good.

But to Jesus, the devil said, “If You are the Son of God…”(Matthew 4:3, 6). He tried to raise doubt that Jesus is God. Jesus had just heard the Voice of God say, “This is My beloved Son…” (Matthew 3:17) and the devil wanted to bring doubt to Jesus about who He is, or else move Him to an arrogant display of power to prove who He is.

It keeps us in obedience to God when we not just hear what He said, but know what He means—to have understanding. This is why we don’t just read the Bible, but study to understand (2 Timothy 2;15, Proverbs 4:7).

The devil told Eve, you won’t really die. It’s a different kind of awareness… God knows that if you eat that fruit you’ll be like Him, knowing good and evil. (Genesis 3:4-5). Implying that maybe God was holding something back from them, something good. The question/doubt was raised, is this command of God really the best thing for me?

Some people say there is an order to understanding dreams, visions, or other revelations from the Lord: 1. The revelation, 2. The interpretation, 3. The application.

I would add something to it: 1. The revelation, which is to include the discernment of the source, 2. The interpretation, e. The application. Don’t even try to understand what it means until you know where its coming from. Yet, even in this, there is a potential trap.

To “prove” who God is, we have His Word.
The devil tried to get Jesus to doubt who God was (who HE was). Jesus’ response was the Word.

On the one hand the devil tried to get Jesus to preserve His physical life (turn the stones into bread). On the other hand he tried to get Him to be reckless with it (throw yourself down from here).

We must keep in mind though, that we try to understand the Word He spoke in order to determine if it was He who spoke it. But yet..
Doesn’t that make us a judge of Him, of who He is, or if He is God?

This makes us His judge, which we are not. This is the trap to avoid. He can say what He wants. It’s not up to us to judge whether what He says is “correct” or good. Even Jesus said there is only One good, which is the Father. He wouldn’t even call Himself good (Matthew 19:17.) So we are not judging God, but we search the Scriptures, and the Holy Spirit, to gain proper understanding of what He said. He is truth above all. We seek to align with it, not judge whether its right or not. There is a difference that we must be aware of. It's easy to cross that line if our heart is not fully surrendered to Him.

If we try to analyze what He said to make a determination if its Him—the voice of God—we might cross the line to becoming His judge. The Pharisees tried that, but it didn’t work for two reasons:

2.       Their heart was not right. They didn’t want Him to be the Son of God. They didn’t like Him. They were critical of Him. He threatened their positions.

So then, how do we know and determine if it is He who spoke so we are not misled?

“If you continue in My Word you are truly His disciples, and you will know the truth and the truth will make you free.” (John 10:31-32).

Eve didn’t pray about what the devil said to her. She didn’t discuss it with Adam either (that we know of).  She just reasoned within herself—not looking to verify what he said. Of course he could have spoken to her more than once, raising the doubt on several occasions, but was there any verification with Adam as to what God exactly said? Or was there any direct communication with God Himself when He walked with them in the cool of the day?

Not intentional fault-finding just because we don’t like what He said.

It comes down to the heart motive. Seeking an explanation for further understanding and clarification is O.K. (Mary—how can this be since I am a virgin?) (Luke 1:34).

You know Who, but not necessarily why. That’s O.K. Yet more is revealed to the one who seeks.

Ultimately, do we WANT to obey Him?

“Search the Scriptures” Jesus said, “In them you think you have life, but they testify of Me.” (John 5:39).


Posted by RoseMurdock at 9:05 AM No comments: