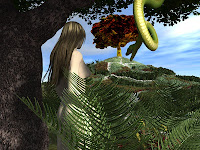 I think it was Kenneth Hagin Jr. who I once heard say, "If you really knew it was God speaking to you, telling you to do something, of course you would do it." His point was that the reason we don't obey the voice of God is because we're not sure it's really Him, if we knew for sure it was God telling us to do something, of course we would obey--our hesitancy comes because we doubt whether it's really Him talking to us.


We have the same doubt today that the serpent raised in the Garden--Has God said? We ask ourselves, "Is this really God speaking to me? Did God really say this?"  The words, did God really say... are resounding around the world today, because someone took them into her heart in the beginning. At some point, the people of God need to stop the cycle, stand up and say, "Yes, God said this! I believe it, I receive it into my heart, I will obey, put it into practice, and go forward with it!"


If Jesus appeared to you in the flesh and said, "Go buy this building." Would you do it? Or would you doubt it was Him? Would you begin to speculate that it could have been an angel of light and not really the Lord? What is the difference between that and hearing Him speak to your heart and then questioning whether it was Him? In either case you can allow the words, "Did God really say..." into your heart, keeping you in a place of disobedience.


We don't doubt that someone said the words, we doubt that it was God who said them. Was it really Him, or someone else? Or we might doubt that we heard Him correctly, we think we may have misunderstood Him and He didn't really mean what we think He meant. Because we know the story of Adam and Eve, these words of doubt bring fear to our heart so we do nothing. We are afraid of making a mistake and we become paralyzed. We are afraid of looking like a fool, afraid of being wrong and the consequences that might bring. We have allowed the original terrorist to keep us in fear and disobedience, instead of faith and obedience to God. When this happens, we ignore what was spoken--put it on a shelf to "wait and see" what happens. It's time we answer the doubts--address them and respond to the Lord's words in faith and obedience.


But, but, but, you say, that's the problem, I can't obey God because I don't know if it's Him speaking to me! I beg to differ. Yes you do. If you believe in Jesus, and follow Him, then you do know His voice. Jesus said, "...you do not believe because you are not of My sheep. My sheep hear My voice, and I know them, and they follow Me;" John 10:26-27. If Jesus is your Shepherd, you know His voice. Yes you do. Jesus once appeared to me in a dream and I asked Him what church I should go to. This was not long after I returned back to Him after a period of backsliding. He said to me, "You know how to find out." I knew that what He meant was that I knew how to be led by the Spirit, I knew how to follow His leading and I could find this out at any time. I didn't need to wait until He appeared to me to ask Him that question. "For all who are being led by the Spirit of God, these are sons of God." Romans 8:14

To help keep us on track with hearing God's voice, we need to answer the question, "Is this God?" with the question, "What has God said?" When Jesus was tempted in the wilderness by the devil who was trying to get Him to do what he said, Jesus answered him every time with, "It is written..." Jesus was "led around by the Spirit in the wilderness for forty days, being tempted by the devil." Luke 4:1-2. The devil also "led Him" to a couple of places. But Jesus, knowing the Word of God and being led by the Spirit of God, did not obey the devil. Three times He did not obey what the devil was saying, and then He "returned to Galilee in the power of the Spirit." Luke 4:14.

When we have faith in God's words, and don't doubt, resisting the temptations and leading away of the devil, we are led by His Spirit to the garden He has prepared for us so we may cultivate it and bear much fruit. This is the place where we abide in Him and He in us. Where we walk and talk with Him in the cool of the day. This is the place where you "ask whatever you wish and it will be done for you." John 15:7.

Don't look for a formula in hearing the voice of God--a foolproof way to ensure it's Him. Besides, He doesn't want you to do so much for Him that you don't do anything with Him. God knows your struggles and fears regarding hearing His voice. He has given you His Word--both living and written, and His Holy Spirit, to help you. He knows our tendency to be misled. He is merciful and gracious, but He still needs us to rise up in faith and obedience to Him. Replace the question, "Has God said?" with the faith-filled proclamation, "God has said!

Posted by RoseMurdock at 6:59 AM