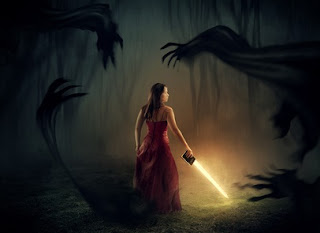 "Now these are the nations which the Lord left, to test Israel by them (that is, all who had not experienced any of the wars of Canaan; only in order that the generations of the sons of Israel might be taught war, those who had not experienced it formerly). These nations are: the five lords of the Philistines and all the Canaanites and the Sidonians and the Hivites who lived in Mount Lebanon, from Mount Baal-hermon as far as Lebo-hamath. They were for testing Israel, to find out if they would obey the commandments of the Lord, which He had commanded their fathers through Moses.” Judges 3:1-4

The Lord left these nations in the land of Canaan--the Promised Land--to test Israel, specifically to test "all who had not experienced any of the wars of Canaan." He had a purpose in doing so. He wanted the next generations of the sons of Israel to be taught war. The Lord wanted each generation to be taught war. In addition, each generation was tested to find out if they would obey the commandments of the Lord. So we see two things the Lord used these enemies of Israel for:
Apparently the Lord thought knowing how to war was an important skill. It’s important enough to Him that He wants each generation to experience it for themselves. It wasn’t enough for them to hear about it, they had to maintain this skill of fighting for their land--the Promised Land--where they could freely worship God according to how He had commanded them. God wanted Israel to have the freedom to live by the Law of Moses, and to recognize that freedom was worth fighting for.

Today, we in America are in the midst of a Canaan War of our own. This generation needs to learn to war--to fight--for the land the Lord has given us. This generation hasn’t had to fight for the freedoms we’ve enjoyed since our founding. They’ve been taken for granted, and even questioned as to whether they are something to hang on to. As this generation fights their own “Canaan War” they will learn that religious freedom is something worth fighting for. The land the Lord has given us is worth the war.

What land has the Lord given us? The land is religious freedom. America was founded so people would have freedom to worship God as they choose. To be able to pursue what they feel is their God-given call, and not have a government dictate how they are to live. Our founders recognized the need for a government, for things like defense and economy, but realized that the people must be free to worship God and pursue His call without governmental interference. The Constitution of the United States was written in such a way to protect our religious freedom and to explain how it can be kept in place. This is part of the Canaan War this generation is to fight.

As Christians, not only must we be sure to teach our children the Word of God and the ways of the Lord, we also need to teach our children to war for the land, so they will be skilled warriors as adults and be able to win the war against those who try and take our freedom--our land. Our constitution is a weapon we use in this fight.

The Canaan Wars test the people to prove whether or not they will keep the commandments of the Lord. Will they walk in His ways? Will they seek Him in all their paths? Will they choose the Lord even when it’s not easy? Will they fight for the land He has given, believing that He has given us this land? The young people of this country cannot live off the coattails of their parents (or grandparents) faith. They will need to prove that they themselves will seek the Lord and walk in His ways.

Parents, whatever we have done wrong to not nurture our children’s faith, we need to ask the Lord’s forgiveness. However, we must also recognize where we have gone wrong in not teaching our children to war for the land. If you still have young children at home, their faith in the Lord, love of the Lord, and instruction in His ways needs to become a top priority. This is to include warfare for the land. As parents and grandparents, we must get into the War Room ourselves and pray for our children and grand-children. If you don’t have any children of your own, pray for someone else’s. This generation is going through war and tests and we must pray! And we must teach.

Let us learn from our mistake of not remaining sober and alert to the enemy's devices in trying to take our land from us. We can no longer assume that those in authority are watching out for our best interests. In whatever way we personally have neglected to maintain the land the Lord has given us, we need to ask for forgiveness and start on the right path.

In the education of children, whether at home, church, or school, let us seek to impart a desire for them to fight for the land, and teach them how. Let us teach our children the ways of the Lord, to seek Him early--at a young age--and diligently, while He may still be found in this country.

Posted by RoseMurdock at 3:38 AM