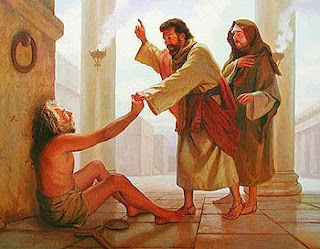 1 Now Peter and John were going up to the temple at the ninth hour, the hour of prayer.
2 And a man who had been lame from his mother’s womb was being carried along, whom they used to set down every day at the gate of the temple which is called Beautiful, in order to beg alms of those who were entering the temple.
3 When he saw Peter and John about to go into the temple, he began asking to receive alms.
4 But Peter, along with John, fixed his gaze on him and said, “Look at us!”
5 And he began to give them his attention, expecting to receive something from them.
6 But Peter said, “I do not possess silver and gold, but what I do have I give to you: In the name of Jesus Christ the Nazarene—walk!”
7 And seizing him by the right hand, he raised him up; and immediately his feet and his ankles were strengthened.
8 With a leap he stood upright and began to walk; and he entered the temple with them, walking and leaping and praising God.
9 And all the people saw him walking and praising God;
10 and they were taking note of him as being the one who used to sit at the Beautiful Gate of the temple to beg alms, and they were filled with wonder and amazement at what had happened to him. Acts 3:1-10

Have you been in a troubling situation for a long time? This man was crippled from his mother's womb. All he knew was to be carried to the temple gate every day so he could beg for money. This had gone on his whole life. He couldn't take care of himself, and had to rely on the generosity of others. He went to a place where people would be compassionate. He went to the people of God, where he could find mercy. They would give money so he could stay alive, and maybe even enjoy some comforts while remaining in his crippled situation. The people of God gave to him, and probably felt good about it, and he benefited as well from their giving. This was his life and he, and everyone else, was used to it.

This man was not expecting to receive anything other than alms to make his life easier. He wasn't even looking at people while he begged. If he said anything at all he may have just spoke generally to everyone who passed by. He didn't expect Peter and John to give him anything special because when they passed by, Peter said, "Look at us!" He hadn't made eye contact with them until Peter said that. Yet even then, when he did look at them, he was still just expecting to receive alms. He didn't see what was coming. He didn't see that they could offer him a way out of his crippled life. He was expecting life to go on as usual, not a miraculous change that would turn his whole life upside down--or right side up.

Peter gave him what he had to give, "In the name of Jesus Christ the Nazarene--walk!" He pulled him up by the right hand and immediately he was able to walk. God interrupted his life. He broke the cycle of crippledness in this man's thinking, as well as his body. The man entered the temple with Peter and John walking, leaping and praising God. This caused the people to be filled with wonder and amazement. God was glorified in this man's healing, and that was just the beginning of his new life.

Are you in a situation where you know you need help beyond yourself just to survive? You don't have it within yourself to even get by in life? Have you gone to the people of God looking for help? Maybe they offer prayer, gifts, time or whatever they can give to help you be more comfortable in your current situation. You appreciate that, of course, and that may have become "normal" for you. You go to the people of God for help and prayer and it works for a time. However, God is calling you up to a higher level. He is able to do more than just make you more comfortable in your crippledness. He is able to pull you up out of it so you are crippled no more!

Look up. Look to Him. Look beyond what the people of God can do, and look to what He can do through them. Look expecting. Look with hope. I hear bones popping back into place! Rise up out of your crippledness and walk in the Name of Jesus!


"Father God, come invade our lives. Interrupt our living. We no longer want that which will just sustain us in our crippled situation. We look to You Lord, not expecting to receive that which will just make us better able to tolerate a lame life, but we look to You with expectancy to pull us up out of our crippledness, so we may enter into the fullness of You. So we may walk and leap and praise You, fulfilling our destiny!"

Posted by RoseMurdock at 6:44 AM