A Christian's Response to Transgender Children 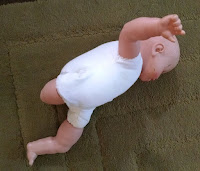 Your five-year-old daughter makes a comment about wishing she was a boy. Or maybe you notice she likes to play with trucks, play in the mud, or pick up snakes and frogs. Does the thought cross your mind that she might "really" be a boy, or that you should tell her she can be a boy if she wants to? There are some who would tell you that you should consider treating her as a boy and even consider "transitioning" her to the opposite sex. As a Christian, what exactly is wrong with that?


Let's set aside God's opinion for a moment, even though that alone should be enough to convince you it's wrong. But we'll hold off on that and look at what happens when you try and transition her. First, it's important to know that a child continues to mature in the understanding of their gender after birth. Gender is determined before birth, of course, but during childhood a person learns to become comfortable and accepting of their gender, and of themselves in general. (Ref.) If a child questions her gender, and you respond by suggesting that maybe she shouldn't "be a girl," that she should dress and act like a boy, what are you really teaching her? You are teaching her that she is not okay as she is. Something is wrong with her. She was born with a defect. You are teaching her to reject who she is. Instead of teaching her to love herself, to understand and work through the ups and downs of being a female, which leads to a solid gender identity and acceptance, you are setting her on a horrible path of trying to be something she's not.

When she has doubts, concerns, questions, maybe even rejection of who she is, (some of which may be completely normal in the maturing process), teach her how to be a girl, not to reject herself. Trying to change who she is brings more than confusion--it shakes the very core of who she is. Rather than learning to work through personal strengths and weaknesses, she is told to reject truth and make up her own reality. Parents who do this are setting her up for failure, as she loses the precious years of childhood. Time when she should be learning to grow and develop in her personal gifts and call, instead are spent trying to change the impossible and convince herself, and others, that she is something she isn't. The more she struggles and becomes confused, the more people say, 'see we were right, she really is having gender issues.' But she has "issues" because they created gender confusion by giving her the idea that gender is a choice when it's not. The pressure of choosing the "right" or "wrong" gender is too much for a child. It creates the confusion she is experiencing, it's not evidence that confusion was already there. It becomes a self fulfilling prophecy so to speak. Kids need to know where the boundaries are. They find comfort in unshakable truths. When we take boundaries and truth away, we leave them feeling insecure and confused.

The funny thing is, those who support transgender students are saying we need to accept them, and claim to be the most caring, yet they are inflicting the worst kind of rejection onto them because they fail to accept who they are, or help them through the questions and struggles of normal gender maturity. Instead, they encourage these children to reject themselves--the truth of who they really are. Who is really being kind to this child? Not the one who lies, but the one who speaks the truth.

This is the kind of deception going on in today's world. Some do not admit that there are certain unchangeable truths. These are truths that God Himself establishes. We see this decline in our society happening as we have declined in giving God first place, accepting Him as the ultimate truth. No matter how hard you try, you cannot change your gender. Changing your gender is like trying to change your birthdate. It's not something that can be changed. Its a fact, not a feeling or preference. The only thing that can restrain this out of control/anything goes kind of behavior is truth. When we reject truth, we become deceived and don't know it. We live a lie and will suffer eternal consequences of rejecting truth unless we change and embrace God and His truth. (2 Thessalonians 2:8-12).

So what does God say about gender choice? God commanded His people to keep His statutes and said, a man "shall not lie with a man as with a woman. (Leviticus 18:22). He also said "A woman shall not wear man's clothing, nor shall a man put on a woman's clothing." (Deuteronomy 22:5). This covers homosexual behavior and cross-dressing. Homosexuality and transgendering go hand in hand. When you have one you eventually, if not immediately, have the other. Transgendering, in the mind of God, is nothing more than cross-dressing. He formed us in our mother's womb male or female. (Psalm 139:13). The sex He formed us is the sex we are. All this gender changing/sexual behavior which deviates from what God has established is sinful in His eyes. And it's His eyes that matter, our opinion is always subject to His. He establishes truth and righteousness.

In Luke 17:26-29, Jesus compares the days of Noah with the days of Sodom. Homosexuality was rampant in Sodom. It is what brought about their destruction by fire and brimstone. So the flood which destroyed every living thing, except those in the ark, happened when homosexual sin, and other sexual sin, was out of control (Genesis 6, Genesis 19). This divine opinion of homosexual related sin was reinforced in the new testament when Paul wrote that those who practice homosexuality will not inherit the kingdom of God. (1 Corinthians 6:9-10). God is not in favor of homosexuality, gender choice and all of the related behaviors that go along with that. (See also The Bible and Same Sex Love).

So what is a Christian's response? We pray, we love, and we speak the truth. We submit to God's ways and do not compromise. We teach our children truth, and lead them into an encounter with the Lord--the One who loves them more than anyone else, the One who knows them more than anyone else. When a child experiences the true love of the Lord, he or she will fall in love with Him, and things have a way of falling into place.

Posted by RoseMurdock at 1:50 PM