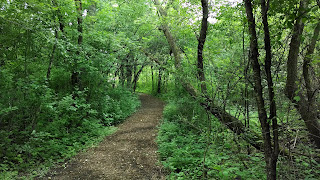 Years ago, pioneers explored wild regions of the earth and began to provide access to more desirable locations first through foot trails. These well traveled paths became roads which allowed for quicker and easier travel, as well as allowing people to carry more stuff on horses, wagons and so on. Of course rivers also became pathways that provided travel, and just like roads, provided opportunity for commerce allowing people to settle and build homes and businesses. Pioneers made destinations accessible, as well as travel to and from those destinations. Eventually, more means of travel developed--trains, cars, airplanes and even rockets. All of these means of travel allowed for people to move from place to place more easily and quickly.

Sometimes, people didn’t need to go to another place themselves, but still wanted to communicate with others who were in another place. Messengers would be sent--runners on foot, horseback, and eventually postal systems were developed. Technology kicked in again and the telegraph and telephone were invented. The telephone was a big deal because it allowed for two-way communication. It was more than just a message being sent from one person to another, it allowed for both parties to talk, ask questions, share news, laugh, and so on.

Eventually, radio, television, cable, internet, wireless, and satellite technologies also allowed for communication between people who were in different places. Some of it being one way communication and some of it, like the telephone, was two way communication--ham radios and of course social media like facebook and skype. Recent technology has allowed for more than voice to be transmitted. Now we can have video chat's, webinars and so on.

What are we to think about this advancement in technology? Many people don’t like this kind of “remote” communication and feel that being physically present is by far the best. They think of it as a necessary evil. Yet, God gave the knowledge for people to develop these technologies. He designed the earth so these types of communication would be possible.

One thing to consider, is that these avenues of accessibility open the door to both the good and the bad. Just as the pioneers built roads so people could travel to, from, and within their communities, it also made it easier for thieves to come and steal, or for those with “opposing” opinion to come influence the young. The internet and social media do the same thing. They open doors for good, healthy communication and business, but also for criminals who will try to steal, entice, or influence our children with views contrary to what we know to be good and right. With different methods of accessibility, comes the need for increased discernment and different methods of protection.

Accessibility to a place gives us the capability to do stuff there--build and live our lives. As we’ve already said, roads make life quicker. You can carry more. You can travel back and forth easier so you can make purchases to help build your home and your life. You can gather and interact with other people. You can enjoy life. Accessibility through remote communication does the same thing. It makes banking and shopping quicker. It makes all kind of practical knowledge more readily available. It makes photos, videos, and typed communication with family and friends available when you can’t see them in person.

But with remote communication you can’t lay on hands to pray or impart, touch, hug, or share meals. Can you? Does remote communication allow for impartation? It might. There have been those who report having been healed or touched by the Lord in some way after watching a television broadcast. But let’s face it, physical touch is necessary and enjoyable sometimes. Think of comforting a child, getting a massage, having children… Families should definitely be together physically when possible.

How does the church fit into all of this? Jesus, of course, traveled with His disciples throughout His ministry. He sometimes set went to a certain city or place, but we see Him having encounters with people along the way. Think of Jairus, and the woman with the issue of blood. (Mark 5). Because Jesus was physically present, she was able to touch His clothes and be healed. But did she need that physical touch? According to her faith, she did. Other did not. The centurion who said that Jesus didn’t even need to come to his house said, “Just speak the word only and my servant shall be healed.” He did and he was healed. (Matthew 8).

Where the church is going in the future may not be to a destination in itself, but what occurs along the "roads" may be what we need to pay attention to. When you walk, you are up close and personal with the land. A road is more than a means to an end. Lines of accessibility, whether they are roads, wires, or airwaves, are the spaces between the places. A lot goes on there. Sometimes we need to leave the 99 and go get the one that is out there between the places. I think the key word is go, or as Jesus also said, “leave.” (Matthew 18:12, Genesis 12:1).

However, God placed Adam and Eve in a garden and told them to fill the earth, He sent Abram to Canaan, Jesus to the earth, Jonah to Nineveh, and many other prophets and preachers to physical locations. We see Paul saying that he longed to see them so he could impart a spiritual gift. We see God supernaturally transporting Phillip from one city to the next. It seems that a physical presence in these locations were desirable. Yet we also see messages being sent through angels, or dreams and visions. We read about the apostles who communicated “remotely” through letters, the times Jesus just spoke a word from a distance and things happened, the things that happened along the way like blind Bartimaeus or Zacchaeus, or even the wounded man that the Good Samaritan brought to the innkeeper for healing. Both roads and destinations have their purpose.

What really are the “desirable” destinations of God’s people? The places were we will settle, build, and enjoy life? Many are trying to get to a desirable place so they can feel like they’ve “arrived.” Is the goal to find that “perfect” church? The one where everything always goes smooth and the services are always polished? Where every prayer is answered to your liking and where the pastor never offends you? Or is the “desirable destination” out there on the road somewhere? The road where you can find one who has been beat up, ignored, and left for dead, pick him up and carry him to a place of healing? The place where you meet someone and invite them to dinner? The place where you pray for someone right then and there and he is healed? The place where you guide a child on his journey through childhood?

The destination is the transformation of our own lives to become conformed to the image of Jesus, which is our predestination. Whether that happens out on the road or in a settled place will depend on God's call for you, and your own faith.

Posted by RoseMurdock at 9:47 AM