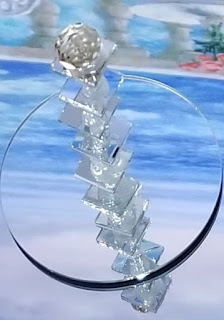 Therefore, since we have so great a cloud of witnesses surrounding us, let us also lay aside every encumbrance and the sin which so easily entangles us, and let us run with endurance the race that is set before us, fixing our eyes on Jesus, the author and perfecter of faith, who for the joy set before Him endured the cross, despising the shame, and has sat down at the right hand of the throne of God. Hebrews 12:1-2

Do you not know that those who run in a race all run, but only one receives the prize? Run in such a way that you may win. Everyone who competes in the games exercises self-control in all things. They then do it to receive a perishable wreath, but we an imperishable. Therefore I run in such a way, as not without aim; I box in such a way, as not beating the air; but I discipline my body and make it my slave, so that, after I have preached to others, I myself will not be disqualified. 1 Corinthians 9:24-27

We're told to run the race set before us with endurance, fixing our eyes on Jesus--our example. We're told to run with winning in mind. We don't run aimlessly, but we discipline our bodies, making it our slave. In other words, we train like we were training for the Olympics.

If your goal was to try out for the Olympics, and not only make the team but win the gold medal, you would train intensely. You would spend hours a day. If you were studying for your doctorate degree, you would put much time into your studies, research, writing etc. In the same way, if you want to be an Olympic Christian--one who wins the prize in the race set in front of you to run, then you must train for it. You must prepare for it. It won't just fall in your lap.

So how do you train for it? Time and energy. Thought and attentiveness. Planning your life around it. In other words, make time every day for studying the Word of God and spending time in prayer. Go above and beyond.


Be diligent to present yourself approved to God as a workman who does not need to be ashamed, accurately handling the word of truth. 2 Timothy 2:15.

I'm not saying to simply memorize the book order and be able to eloquently quote a multitude of Scripture. But study so you understand the thoughts and concepts that are written. Study to understand the message God is saying through the Scriptures.


And the one on whom seed was sown on the good soil, this is the man who hears the word and understands it; who indeed bears fruit and brings forth, some a hundredfold, some sixty, and some thirty.” Matthew 13:23

Give diligence to understand the Word of God. Discipline yourself to inherit the imperishable prize. Train yourself daily, throughout the day. Day and night, so you are diligent to live according to the truth of it.


This book of the law shall not depart from your mouth, but you shall meditate on it day and night, so that you may be careful to do according to all that is written in it; for then you will make your way prosperous, and then you will have success. Joshua 1:8

Shall not depart from your mouth means that its constantly in your mouth. It never leaves. It doesn't mean you don't speak it, but that you don't stop speaking it. Meditate on the Word of God. Speak it out loud. Ponder its meaning. Discuss it with the Lord. Don't just read it, put thought into it so you are sure you accurately understand. Ask questions. Why this, not that? What it the context, the setting, the history? Do all this and become the Olympic Christian you are called to be!