"and the Holy Spirit descended upon Him in bodily form like a dove..." Luke 3:22 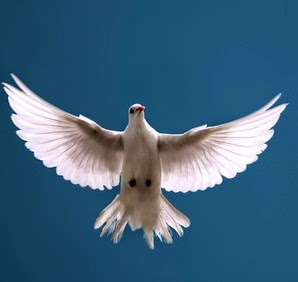 After Jesus was baptized in water, the Holy Spirit came upon Him, resting on Him, like a dove. Because of this Scripture we often refer to the Holy Spirit as a dove. Why did God choose a dove? I'm reminded of another place in Scripture where a dove was used when another bird wasn't quite so helpful. It was with Noah. After the rain stopped Noah opened the window of the ark and sent out a raven. The raven flew here and there until the water was dried up from the earth. The raven never came back to let Noah know what was going on. It just went on its way exploring the earth.

"Then he sent out a dove from him, to see if the water was abated from the face of the land; but the dove found no resting place for the sole of her foot, so she returned to him into the ark..." Genesis 8:8-9

The dove returned to Noah, letting him know the water was still flooded over the earth. I love how the Scripture reads, "Then he put out his hand and took her, and brought her into the ark to himself." The dove had no place to rest and returned to Noah, who gently received her back into the ark. It seems the dove will rest in a place where one will gladly receive her, appreciate her, and learn the language she has to speak. Noah waited another seven days and sent her out again. This time the dove returned in the evening with a freshly picked olive leaf. Noah understood this communication from the dove--the water was abated from the earth. Seven days after that he sent her out again and she did not return. It was time. How helpful it is to welcome the dove and learn the language of the Holy Spirit.

By the way, I'm not anti-raven, for the raven brought Elijah food during the drought as God instructed in 1 Kings 17.

Posted by RoseMurdock at 7:38 AM